Exmo is ecstatic to announce the addition of two new assets to their cryptocurrency platform i.e. Ontology (ONT) and Ontology Gas (ONG).

According to the news, ONT and ONG will be added to the list by February 5, 2020, beginning with the withdrawals and deposits on that day.

ONchain established ontology (ONT) in 2017. Its a public blockchain platform that looks to use systems snd distributed ledgers based on smart contracts.

Ontology technology enables to carry out trust processes and modify them according to the need of company and corporations associated with it. The project agreement liberates it for the business to implement blockchain technology globally.

Ontology gas (ONG) is a high-performance blockchain that is certainly the power of the Ontology blockchain. This asset’s main focus is on solving difficulties related to identity security and keeping the accuracy and consistency of data.

On talking about trading further EXMO looks back onto the high investment risks in the cryptocurrency market. EXMO assures that only definitive cryptocurrencies will be dealt with on the platform.

EXMO was founded in the year 2013 and it’s based in London, Moscow, Barcelona, and Kiev. EXMO is a known crypto exchange platform in Eastern Europe. In the year 2019, they launched their own asset EXMOcoin. EXMOcoin is EXMO exchange’s internal utility token. 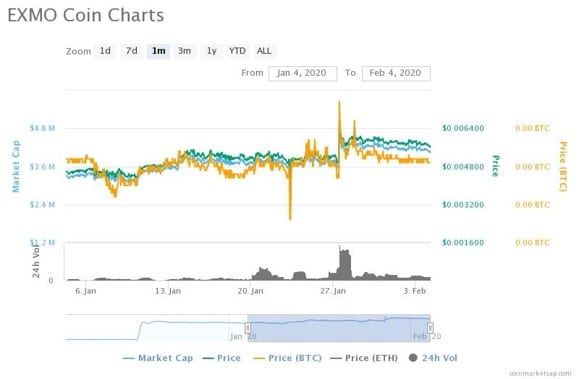 Retail Merchants in Venezuela Refuses to Accept Payments in Petro