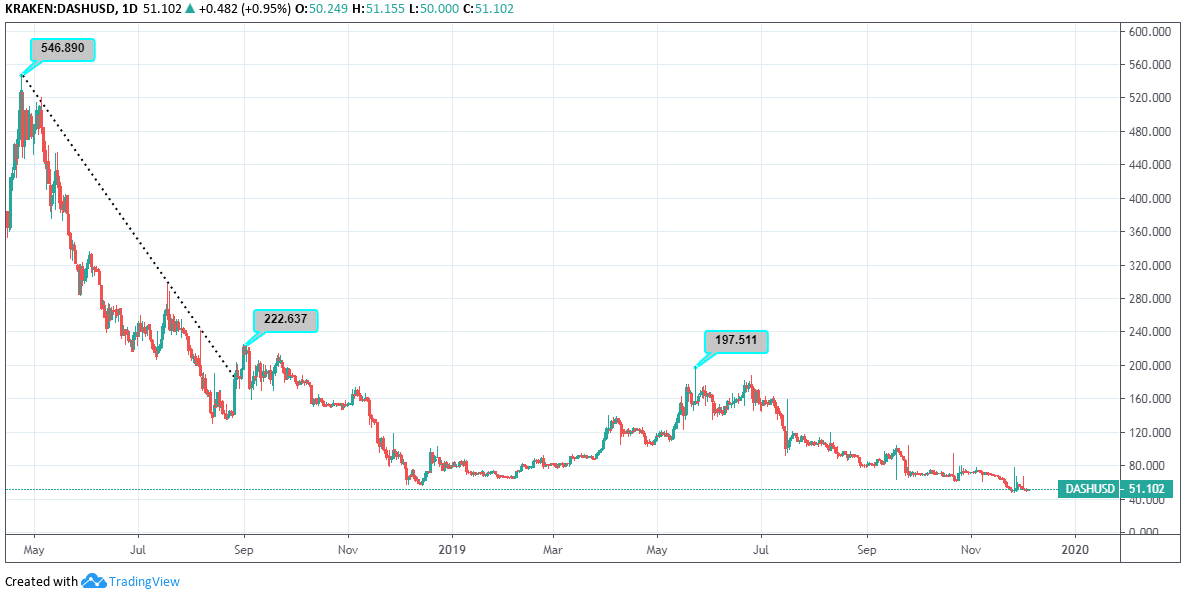 Analyzing the daily long-term movement of Dash on the exchange of Kraken, we see that the coin has enough potential and cannot be ignored as it is currently ranked at 22nd position in the global crypto market. Having discussed the dramatic fall, we even need to mention that it had topped as high as $546 in May 2018. While the end to the previous year appeared, the coin plunged to the bottom around $80 price area.

Similarly, if we connect the dots as we near the end to the ongoing year 2019, will Dash price continue to trade at the uttermost bottom?

Looking into a closer view of the previous month as it was the month of maximum volatility faced by all the major coins viz., Bitcoin, Ethereum, and XRP.

Initially, Dash price was trading around $80 price area until the mid of November, just when the volatility broke in, and DASH/USD price trend faced maximum downside breakouts hitting the lower Bollinger Band. With inactive supports, Dash coin gave a fresh 52-week low at $48, facing an upside rejection after that in the last week of the previous month. The red upside candle formation took the price to $77.72 which just happened to be a bearish upside temporary breakthrough.

Towards the end of the previous month, Dash price tried to rise but unable to battle the inactive supports, and hence, it continued to face strong rejections.

The formation of the Bollinger Bands is such that they seem to have a narrow opening, which may lead to another downside break below $51 as per the current trading scenario.

The MACD of the coin also confirms the bearish pressure as DASH/USD runs below zero, and the signal line overpowers the MACD line.

While the RSI of DASH is 47.35 showing no extremities but an inclination on the downside.

Tron Attempts to Break Above the Bearish Grip; Price Rebound Sees a Correction

Will the Dash Coin Survive? Thoughts on the Dash Price Prediction